I read the New York Times article on my phone as I walked back from parking the car. We’d been at a birthday party for an 8-year-old in New Jersey and now were back home in The Bronx, looking forward to a cozy evening. As I scrolled through the article that reported President Trump’s anti-immigrant and anti-refugee executive order had gone into effect and people were being detained at John F. Kennedy airport, I felt heavy with horror and despair. It’s a quiet-making feeling, despair.

Walking into the house, I found my six-year-old and 13-year-old sons wrestling happily in the living room. I walked upstairs and handed the phone to my husband. “It’s started. There are people being held at JFK,” I said. Already texts were flying between friends. Who was going? 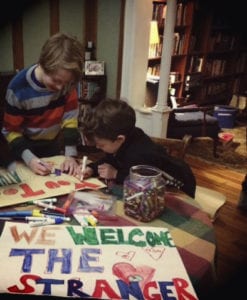 These past few years, we’ve read about the Syrian refugees and migrants with our hearts burning, feeling helpless and impotent as a cruel world became crueler. It was to seek relief from this helplessness that in July my husband and I agreed to host a Syrian student who’d been admitted to a local Catholic college and needed a place to stay for the year. That’s been mostly easy. But the feeling Saturday afternoon was worse than seeing those pictures of the people in the boats. We know what they suffer and we were saying, as a nation: “tough luck.”

I’ve never been under illusions about my country. I grew up going to protests against U.S. policy that funded death squads and assassination in Latin America. I observe Good Friday in Stations of the Cross that find Calvary in mass incarceration and U.S. torture. I live in a neighborhood where the effects of structural racism and an economy for the few are evident everywhere. But this was unmooring: a new regime holds power and is remaking American government at a dizzying speed. I didn’t want to cry in front of the kids, so I closed my eyes tight and drew in my breath.

We pulled out the markers and poster board. My older son took the Shepard Farley poster of a woman in an American flag hijab he’d saved from the Women’s March in D.C., and mounted it on a discarded piece of cardboard. We’d go to the airport. It seemed profane to stay home. But we went in horror and mourning.

I invited our house guest to come along, but he demurred. He’s no stranger to authoritarian governments and didn’t want to risk somehow being caught up in a sweep for people like him at the airport. It was quiet in the car as we drove to John F. Kennedy airport. I didn’t want to speak and risk poisoning my children with my despair. “There is a person in our home who is frightened, actually frightened, of our government,” I whispered to my husband. We looked straight ahead and put on a kiddie album, happy, sweet songs about camping and nature.

I’ve been in this airport dozens of times, picking up and flying off, glancing at the list of airlines with a New Yorker’s smug civic pride: the whole world is home here. But, no, the new president had now said with his executive order: Our fear is greater than our faith in even our own laws and immigration systems. It was cold out there in the parking lot of terminal 4. But as the crowd continued to grow, you could find warmth in the pack of bodies.  I know the rest of the country thinks New Yorkers are obnoxious. We kind of are. But we take great pride in this “city of immigrants” idea. Welcoming the stranger is a Venn diagram where who I am as a Catholic, an Irish person, and a New Yorker come together. And here were New Yorkers by the thousands, outraged and entitled and not taking it one bit. “How Dare You” seemed to be the overriding sentiment of the crowd.

We looked for friends for a little while then decided to stand near the fence separating the parking lot from the roadway. Television news vans set up their klieg lights, and more people kept coming. Young women in prayer shawls prepared to pray with the group Jews for Racial and Economic Justice. Muslim private car service drivers (the cabbies were already striking) honked and cheered as they drove past. A Protestant minister let us hold the sign he’d made that quoted Exodus (for you were a stranger once). Looking up at the five-story parking garage, I noticed hundreds of people leaning over the railings, waving banners and chanting. The chants moved through the crowd like the wave at a baseball stadium: “Let them in”; “No hate, no fear, refugees are welcome here”; “Tell me what democracy looks like” – this one my younger son knew well. “This is what democracy looks like,” he responded, half a beat ahead of those around us, and heads pivoted to see this small citizen.

“Build a wall, we’ll tear it down,” the crowd cried in danceable rhythm. Someone passed cough drops and someone else distributed hand warmers. Across the roadway, the median where travelers wait for taxis was filling too – with every manner of New Yorker. Someone passed pizza through the crowd and someone else asked to borrow my phone to text her mother. Friends texted that the AirTrain, the public transportation to the airport, was overflowing. We knew that inside the terminal and at a courthouse a few miles away, lawyers were using their training, their expertise in the Constitution, to apply the law to justice. This was only one of many, many fights large and small for what is right. But I was proud to be a New Yorker that night, crying welcome, still, beside the golden door. And we were here in the mass, loudly shouting our values. It was a mighty and a joyful and a noisy crowd. If despair is quiet making, cold and lonely-making, hope is loud and communal.

Eileen Markey is an investigative journalist whose work has appeared in the New York Times, New York Magazine, Wall Street Journal, National Catholic Reporter, America, Commonweal, and Killing the Buddha. Markey is a graduate of Fordham University’s urban studies program and Columbia’s Graduate School of Journalism. She is the author of A Radical Faith: The Assassination of Sister Maura.

Called to be Bold and Courageous
Scroll to top