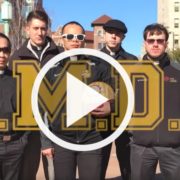 The Jesuits of Loyola University Chicago (particularly the younger ones!) showed off their musical and basketball prowess in anticipation of an important fundraising event to support a scholarship fund for undocumented students seeking to study at one of Loyola’s campuses in the Chicagoland area. Their efforts are tied to the “Jesuit Jam” a yearly collaboration with the university basketball teams to highlight the school’s Jesuit mission, encourage support of Loyola’s teams, and support causes important to the campus community. “Jesuit Jam” was started in 2001 to welcome then-president Fr. Michael Garanzini, S.J., to campus and has become a campus tradition. Past Jesuit Jams have supported local, national, and international Jesuit partners engaged in social ministry.

Loyola Ramblers can get fired up with this “Jesuit Jam” video featuring a number of young Jesuits in studies at Loyola along with Jesuits and others currently in ministry as faculty and administrators on campus.

In 2013, Loyola’s Stritch School of Medicine become the first medical school in the nation to publicly accept applications for admission from undocumented immigrants, which was initiated in response to the establishment of the Deferred Action for Childhood Arrivals (DACA) program, put into effect by President Obama that same year.

In 2015, Arrupe College opened at Loyola, offering a two-year rigorous liberal arts education to a diverse population, many of whom are the first in their family to pursue higher education — including undocumented students. Using an innovative model that ensures affordability while providing care for the whole person—intellectually, morally, and spiritually—Arrupe prepares its graduates to continue on to a bachelor’s program or move into meaningful employment. 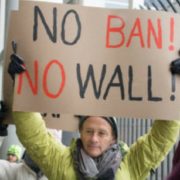 The following is Fr. Timothy McCabe’s homily from January 29, 2017 at Sts. Peter and Paul Jesuit Church in downtown Detroit, MI.

There has been a lot of talk about crowds these days: sizes of crowds, crowds participating in the Women’s march in every major city in the United States; 137 crowds gathering in 40 different countries worldwide; crowds that marched for the Right to Life; spontaneous crowds gathered last night and today in front of JFK airport in New York and O’Hare in Chicago, and San Francisco, and Cleveland and Seattle and here in Detroit; crowds gathering in response to the executive order that has lead to the banning and detaining of refugees hoping for safe haven in our country. 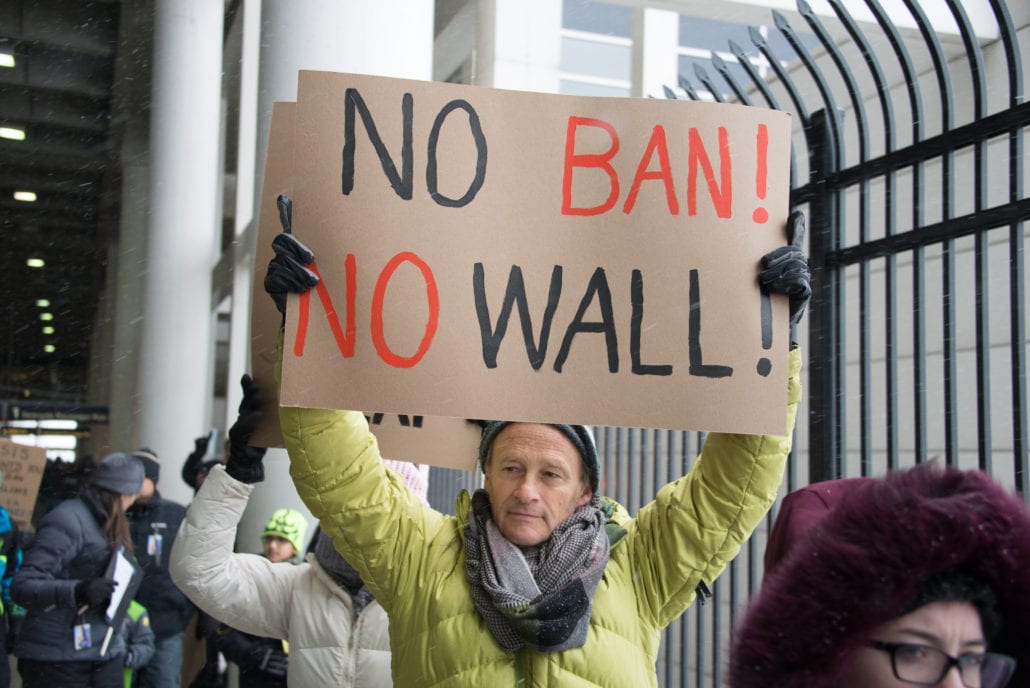 Jesus saw the crowds and he began to teach.

Blessed are the poor in spirit: those were been beaten down, those whose spirits have been broken by oppression and violence and are seeking refuge foreign lands. Blessed are those who mourn, those were forced to flee death and violence, those who have lost family and friends to the brutality of armed conflict.  Blessed are we who mourn when our country’s leaders turned their back on social justice, and diplomacy, and decency in the name of nationalism. Blessed are the meek, those without power, those without voice, those whose lives and futures are determined by others, by the absence of presence of compassion and kindness of other nations. Blessed are those who hunger for righteousness, hunger for justice. Those who understand God’s justice and how it is being thwarted by the powers and principalities in our world that act in defiance of God’s law.

Blessed are the merciful, those who act in tandem with God’s will, those who magnify the love and compassion of God and express that to the poor, to the mourning, to the meek, and those who hunger for justice.   Blessed are the pure of heart, those who do not allow the hatred of others, the racism and sexism and homophobia of others to dictate how they see and act in the world. Blessed are the peacemakers: those who work for justice, for right relationships between God and humanity and between all human beings. Those who see that the kingdom of God is at hand, and do not put their trust in walls and weapons and the oppression of others–especially the most vulnerable–to keep themselves safe. Those who know way of peace, true peace, true shalom—will only be brought about by love. 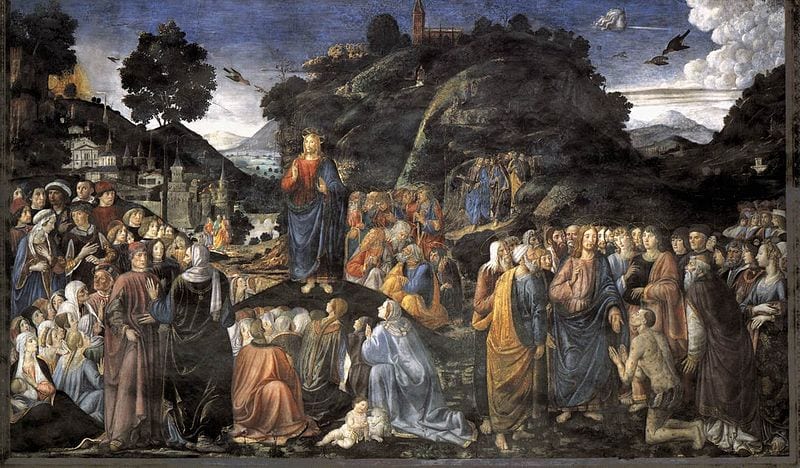 While the prophet Zephaniah and St. Paul in today’s first two readings—may well be speaking and writing to crowds—they are not speaking about crowds. They are speaking about the remnant: the few who hear the word of God and act accordingly.  For Zephaniah, personal experience shows him–like the other prophets before him that those who will act in accordance to God’s commands are not a large numbers of people.  The majority do not listen to the prophets. And as Paul experienced the people follow God’s mandates are not the people he expected. It is rather the foolish the powerless, those who understand humanities dependence upon God, our dependency on God.

So why the poor? Why do they get? Perhaps it is because the more we trust in our own self-reliance, whether it’s our own will, or trusting in weapons of war, or executive orders of exclusion, the more we fall under the hypnotic delusion that we actually are in control.  We lose our sense of dependency upon God. We stopped discerning God’s word and God’s will. As the prophets warned us over and over again: when we move away from direct personal relationship with our creator, when we attempt to protect our citizens in ways that defy the law of God, we are subject to his judgment.  Jesus was clear: “What you do to the least of these, you do to me.” 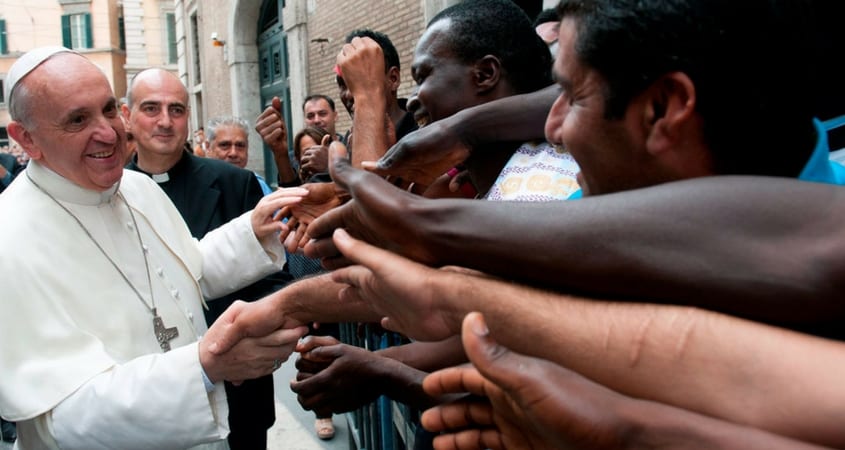 Pope Francis has been very clear in the past few days what it means to be Christians.

And here is Cardinal Joe Tobin statement from yesterday:

Wednesday’s Executive Actions do not show the United States to be an open and welcoming nation.  They are the opposite of what it means to be an American.  Closing borders and building walls are not rational acts.  Mass detentions and wholesale deportation benefit no one; such inhuman policies destroy families and communities. In fact, threatening the so-called “sanctuary cities” with the withdrawal of federal funding for vital services such as healthcare, education and transportation will not reduce immigration.  It only will harm all good people in those communities.

And yesterday our Archbishop wrote to the chair of the Imams Council of Michigan to express his support for immigrants and refugees, no matter their religion or country of origin and his opposition to discrimination on the basis of religion.

It happens every so often—since the beginning of the Jesus movement 2000 years ago—that his followers are called upon to be in communion with God and neighbor in a new way. Called upon to be the moral voice of our time. Called upon to be bold and courageous with their words and actions in defending the rights of the poor and vulnerable, outcast and the stranger among us. Called upon to proclaim a revolution of moral values that will be so threatening to the existing social system of domination that persecution will follow.

This call to the Christian community comes during perilous times: times when such a proclamation will have a cost. I believe we now live in such a time.

The question becomes for us is this: will we be part of the remnant: those who act and think according to the values and mission of Jesus Christ? Will we stand in and for the Kingdom of God proclaimed by Jesus? If we live these beatitudes with boldness, if we do as he commands regardless of the cost, we are assured but His presence and blessing. We can even be joyful in glad when we face persecution and people utter all kinds of evil against us because we will be in good company, Jesus promises us a great reward.