Politicians dominating our airwaves cast “sinners” as easy to identify, quarantine, and exclude. Yet such claims divert attention from the fact that we are all complicit in injustice. The mercy today’s gospel promises can break through our haze of indifference or protective armor of self-righteousness, softening our hearts and inviting us to conversion. 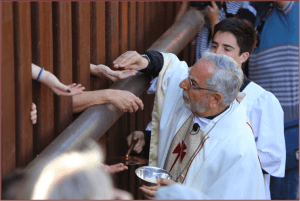 Bishop Gerald Kicanas of Tucson offers communion to those gathered on the Mexican side of the fence during a special border mass to honor migrants who have died in the desert. April 2014. Image cr. Kino Border Initiative

Addressing Congress, Pope Francis echoed today’s passage from Luke, reminding us we shall be measured by the yardstick we use for others: If we want security let us give security. If we want life let us give life. Sin is not a private transaction: we are all part of webs of interdependence that push and pull migrants across borders or degrade the planet, leaving none of us with clean hands.

In response, he offers us models of lament and repentance, whether amidst the graveyard of wrecks on Lampedusa or planted on the border in Ciudad Juárez. Naming and mourning the human costs of injustice—refugees washed ashore, mothers abruptly deported—enables us to more clearly see the webs of sin which ensnare us.

Sin obscures by its very nature. Our faith calls us to denounce injustice and consider where our own complicity remains hidden even from ourselves: selective indifference to others’ suffering; cowardice in the face of new threats; profiting from the exploitation of labor.

Through the noise of efforts to scapegoat outsiders, today’s gospel declares that the sinner may be the one looking to cast the first stone. And in the end Jesus assures his disciples of the “overflowing gifts” that await if we turn from rebellious complicity to imitate God’s generosity and forgiveness.

Kristin Heyer is professor of theological ethics at Boston College. Her books include Kinship Across Borders: A Christian Ethic of Immigration (2012) and Prophetic and Public: the Social Witness of U.S. Catholicism (2006), both published with Georgetown University Press. Her other published works treat questions of conscience, the common good and political advocacy. She serves as co-chair of the planning committee for Catholic Theological Ethics in the World Church and an editor for Georgetown University Press’ Moral Traditions series. Her husband, Mark Potter, is a former ISN board member.

A Right to Hope
Scroll to top