Katie Seltzer, religion teacher at Cristo Rey New York High School, saw the benefits of the day for her students and was motivated to seek out additional smaller-scale, local opportunities for her students to connect in more depth with U.S. Senator Chuck Schumer’s office.

She reached out to other participating New York City area high schools and initiated a partnership between three schools that culminated in a mid-April recess meeting in Schumer’s office. 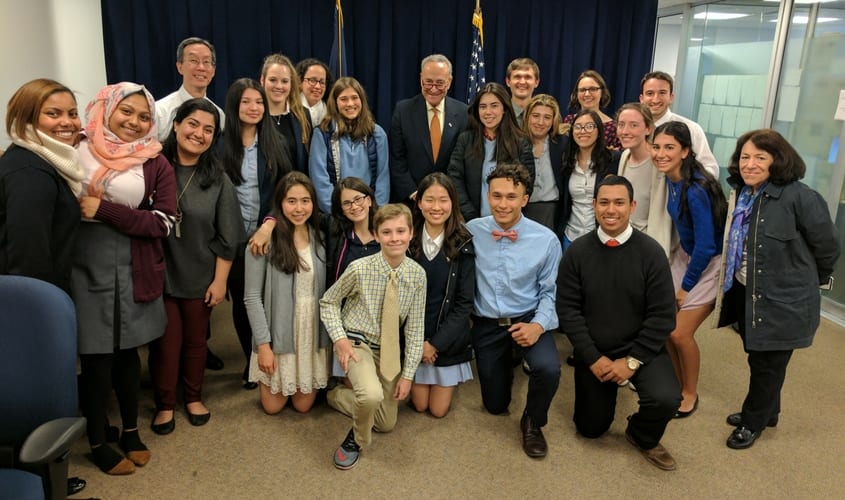 With Michael Chung, director of community engagement at Convent of the Sacred Heart, and Megan Clarke, director of Christian service at Loyola School, Seltzer revisited and expanded upon ISN’s Advocacy 101 training guide and information gathered through Teach-In advocacy trainings and advocacy experiences on Capitol Hill. Each of the sixteen participating students was assigned a specific role for which they prepared prior to the visit.

Chung explained that, while the Teach-In Advocacy Day experience served as an excellent model, his students’ experience through this local partnership was unique. Intensive preparation and organization provided a more student-driven advocacy visit, incorporating more participation, storytelling, and sharing from the students, who had developed discussion topics beforehand.

The students were scheduled to meet with Angela Morel, the constituent liaison for Senator Schumer’s New York City office, who was joined by phone by Lucia Panza, an immigration policy attorney in Schumer’s Washington, D.C. office. Students were bold in their conversation surrounding immigration with Morel and Panza, pushing the dialogue beyond simplified political statements to candid discussion about how students can actually effect change. “This works,” stated Panza in her conversation with students. “Keep doing this.”

Senator Schumer has played a key role in immigration legislation in recent years. In the spring of 2013, Schumer joined a bi-partisan group of eight U.S. Senators—four Democrats and four Republicans—in co-authoring a comprehensive immigration reform bill. The bill cleared the Senate but was not voted on by the House of Representatives, despite strong support from a majority of House members.

Seltzer shared that “for [Cristo Rey New York] students skeptical about their ability to effect change, especially as disenfranchised students, the experience was transformative.” 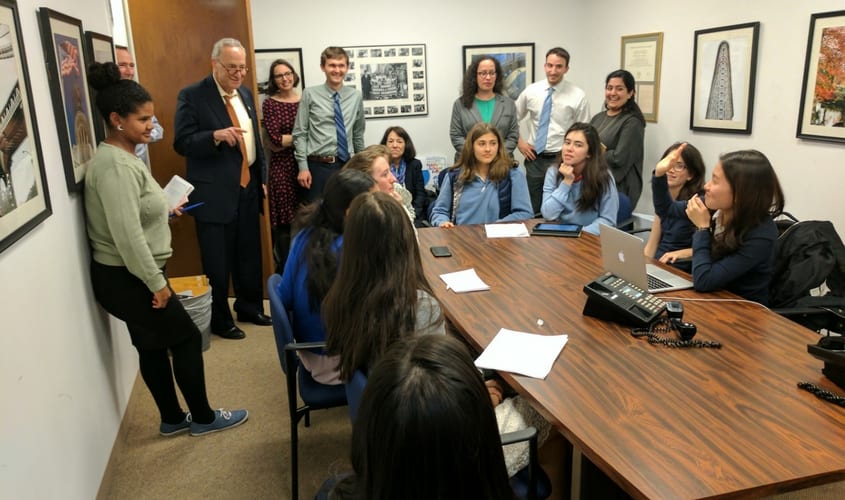 For Loyola School students, Clarke felt that this advocacy visit helped to extend students’ experience of justice. While the school has a robust program centered around service and reflection, most opportunities are exclusively focused on charity. The school discusses social change, and Clarke felt that experiences like advocacy visits create an opportunity to act on those discussions in the context of students’ own city. Students heard that “their voice is important,” explained Clarke. “People want to sit down with them to hear what they have to say.” The visit was not difficult to prepare for or arrange, Clarke shared, “but the impact on the students was huge.”

In an unplanned conclusion to their visit, students were greeted by Senator Schumer himself, who thanked them for advocating for immigrants, an empowering close to a fruitful experience.

“Life is About Interactions”: Solidarity Week at Loyola Academy